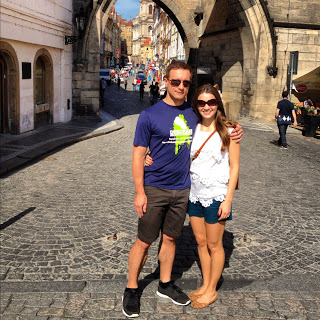 We started our Saturday in Prague with a visit to the gym where I did my usual upper body and leg workouts and Jerry focused on the leg workouts. We then set out on foot to find a bicycle rental place, our goal for the day was to make it up to the Observation Tower at the top of Petrin Hill.

We have witnessed live music by just walking around town on multiple occasions. Not just musicians sitting on the side of the road preforming for money, but more like we pass a building whose windows are open and we’ll hear someone playing something beautiful on a trumpet, or another time someone practicing the piano and we just want to stand around listening to this public concert. At one point later in the day we passed a bar where we saw several men outside playing violins, a clarinet, and an accordion, they were playing a beautiful rendition of Ave Maria as we rode by, I had to stop and enjoy it. In addition to that you will see the street musicians as well.I really love how musical this city is and I am really looking forward to Vienna in hopes that it will be just as or even more musical.
I think I might have figured out this whole Czech language, it’s a combination of Russian, Polish, and Ukrainian, but if you’re Ukrainian like I am the accents go in the wrong spot every time…every time.     Today we also undertook the Charles Bridge. Charles Bridge was not only full of musicians and artists of all sorts it was a work of art on its own filled with ornate statues along the bridge.

After picking up our bicycles we found a great place to eat lunch, more Italian than Czech though. This place was outstanding. They had this big display fridge full of delicious dishes. I ordered from there while Jerry ordered lunch from the menu. He had a house made pasta with a lamb ragu sauce that was outstanding. I had several little dishes to share with him that included marinated artichoke hearts, stuffed mushrooms, stuffed mini zucchini, fennel salad and octopus salad. We then added a truffle butter and a truffle pate container to take home with us as well, really looking forward to appetizing on those in the near future. During lunch Jerry created a new phenomenon, anti-bread…very interesting, so does it cancel out bred or just make it all the better???

We continued on our bicycle journey exploring new areas of Prague all along our way towards the eagerly anticipated Petrin Hill Observation Tower. I knew it’d be hilly since it was Petrin Hill after all, but it was seriously tough. Not only was there about an average of 7% grade the entire way up but most of it was cobblestone, and then we had to carry the bicycles up several flights of stairs until we completely unexpectedly stumbled upon Petrin Tower, perhaps not unexpected, but certainly sooner than expected. After locking up our bicycles and getting these adorable mini ice cream scoops in a cone (I got pistachio & Jerry got chocolate) we proceeded to make our way up Petrin Tower, a 60 m or 197 ft. climb to the top of this tower that offered the most amazing views of Prague. Below are some of the photos we took from the top of the tower, the view was so great you can see the yellow rapeseed fields way off in the distance beyond the city in some photos. 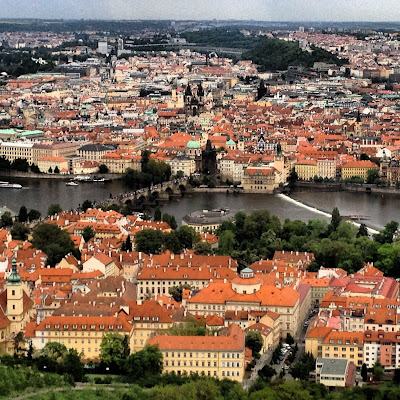 We then made our way down Petrin Hill enjoying the break from all the climbing we had done in the last couple hours. On our way down we encountered several beautiful sites like this waterfall. The path was a very winding path and pretty steep in many areas until we were finally back in town. 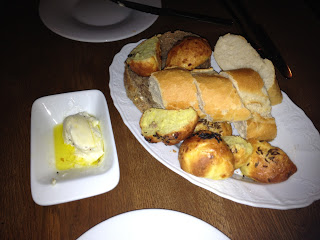 After exerting ourselves on those bicycles we were ready for a delicious tasty dinner. Tonight we went to a Czech restaurant. Their menu was primarily Czech food with a specials french food menu. I insisted on ordering from the Czech menu. With our bread they served soft spreadable bryndza cheese. My mother is a big bryndza fan and I remember having it growing up but I never had it in this soft spreadable consistency with a little bit of olive oil, salt, and pepper which was outstanding. Jerry and I both really liked the bryndza and asked for refills at least a couple times. For appetizers we settled with the foie-gras and a green salad…have to get those greens in, even while traveling.
For our mains I went with a Czech dish, smoked duck with cabbage and knedikly. This dish was hands down amazing. I’m not the biggest fan of duck usually because it tends to be very fatty but apparently duck is on every menu in Prague so I decided if I was going to experience the culture and food I better get this duck thing down. It was the correct choice. The cabbage was delicious and the duck, perhaps because it was smoked wasn’t fatty at all but had a great consistency. Jerry went with Sea Bream on lentils in beet root and snow peas. His dish was also phenomenal. For dessert we decided on buttermilk ice cream with passion fruit sorbet on top, a perfect way to top off a great dinner and ens a second night in the lovely city of Prague. 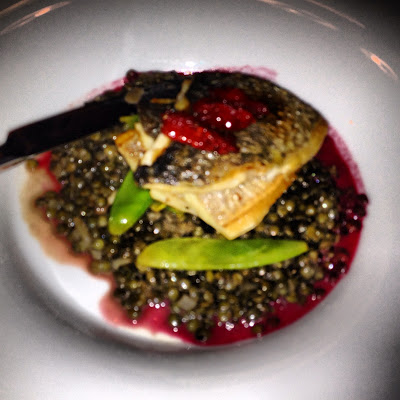 This entry was posted on May 6, 2012 by natalyaperullo in Travel.