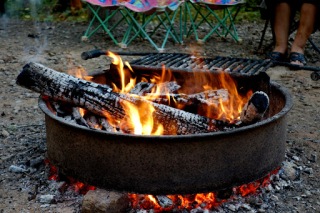 My family did a lot of camping when we were kids and well into our teens. Today I look back at those trips as some of the best childhood memories. We’d run around dirty for a week, maybe getting in 1 or 2 legit showers if we were lucky, exploring the woods, playing hide and seek with flashlights at night (which required sneaking out of the 3 bedroom tent we had after my parents were asleep), swimming in the ocean or lake (whichever was available), fishing, cooking on the bonfire, and doing all the things that kids need to and are meant to do. It had been a long time since I went camping last and Jerry had never been tent camping so I was really excited when my family put together this trip. This was a 3 day 2 night camping trip. My little sister Lydia’s birthday and Jerry’s birthday had just passed earlier this month so we had some birthday activities on the first day. I also brought a dichotomous key to identify trees by their leaves and tried to teach as many of the campers as I could how to use one. I discuss the activities we did in more detail in this post.

Jerry and I arrived to the camp site Friday afternoon with a brand new mountain bike for my sister Lydia’s birthday from all her siblings. After presenting her with it we set up the tent we borrowed from our friends and then enjoyed a late lunch with everyone. I brought balloons to be blown up as part of the birthday celebrations with intentions of getting the kids involved. So we blew the balloons up via an acid base reaction between vinegar and baking soda. Here is a list of the supplies you need for this fun experiment.

Supplies:
1 gallon distilled white vinegar
1 large box of baking soda (I had more than half the box left)
Several 16.9 oz. empty water bottles
2 funnels
Balloons
Ribbon to tie balloons (optional)
Birthday party hats (Optional, but it makes things so much more fun! Especially because, as Philip later discovered, you can throw them into the bonfire afterwards and who can deny the fulfillment that brings!)

Directions: Make sure to to keep the funnel for the baking soda separate from the vinegar funnel, you don’t want the reaction to start taking place too early.
1. Using one of the funnels, fill the empty water bottle about half way with vinegar.
2. Using the second funnel fill the balloon about half way with baking soda.
3. Stretch the mouth if the balloon over the neck of the bottle and once it’s secure turn the balloon right side up to dump all the baking soda into the vinegar.
4. Support the balloon as the reaction happens. Once the balloon is fully inflated, tie it off.
5. Before reusing the bottle again make sure to wash it out well enough to get all the baking soda out of it (Lydia learned this the messy way).
6. Feel free to experiment with the ratios of vinegar and baking soda for the subsequent balloons, it was fun for the kids to see who can blow up the biggest balloon. 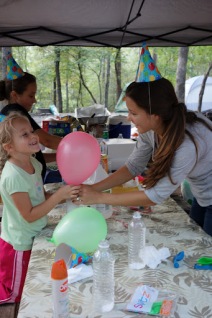 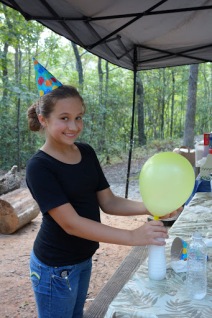 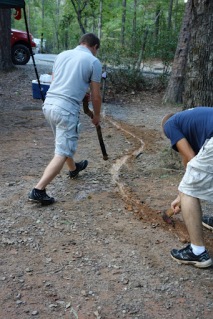 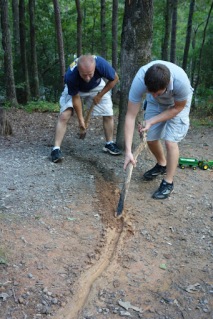 Paul & Serge’s greatest accomplishment of the trip as they claimed it to be. They made a little canal that directed the water away from our camping site and into the woods.

For dinner on day 1 we had fish and potatoes. The potatoes were wrapped in foil and when the fire had calmed down a bit we threw the potatoes in. Some of the potatoes got burned. Perhaps the fire was still too hot or maybe we should have double wrapped the potatoes or taken them out sooner.  My mom brought all sorts of whole fish, seasoned them, wrapped them, and put them on the grill over the bonfire. The fish didn’t take long before it was done. Being pregnant I just had a little bit of fish, but it sure was delicious.

I began Saturday morning with a short jog. It was a beautiful day and by the time I got back and showered Kristina was done with making pancakes and Luda was making omelets in a bag. To make the pancakes Kristina pre-mixed the the pancake batter and poured it into a bottle with a funnel  which she kept in her cooler. This made it easy to pour the pancake batter on the hot pan over the bonfire. For the omelets Luda chopped up all the topping (bacon, onion, bell pepper, broccoli, chives, and cheese) and beat the eggs in a separate bowl. Everyone then got a heavy duty freezer bag with their name on it to fill with whatever ingredients they wanted and top it off with the beaten egg. Meanwhile, we brought a pot of water to a boil over the bonfire and once it was boiling we took turns throwing in several omelet bags in at a time. The recipe said to keep them in the water for about 13 minutes, but we  found that only really worked for the small omelets, the bigger ones took more time. 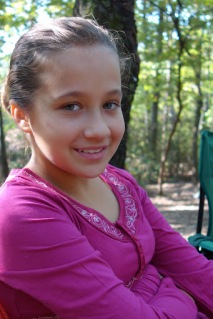 We then set out to find some pedal boats and do some hiking. Kristina, Serge, and Lydia powered the first pedal boat. Jerry and I powered the second pedal boat with Dina and my mom relaxing in the back. The third pedal boat was powered by Paul and Luda with Michael and Philip in the back. We brought plenty of bananas, peaches, plums, and apples to re-energize everyone for the hike afterwards. 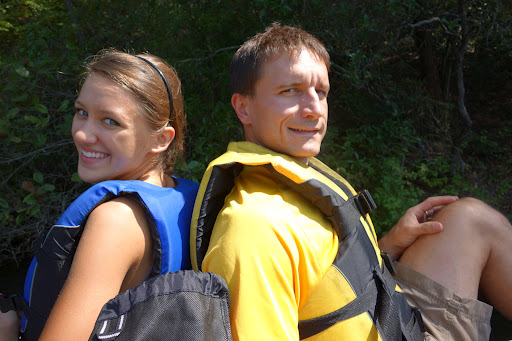 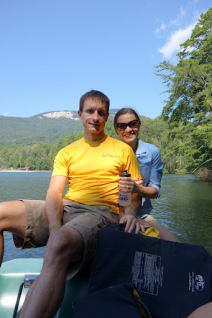 We then headed out for our hike. I brought a dichotomous tree finder guide so everyone could get practice using it to identify a tree of their choice.I also brought some plastic sandwich baggies, large sticker labels, and a permanent marker. Once we identified the tree we picked a leaf off it, put it into a sandwich bag, and labeled it with its common and scientific names. I think everyone really enjoyed this activity.

After we all had had enough hiking and were getting hungry we headed back to our camp site where it was my turn to prepare lunch. Kristina made some yummy appetizers by sauteing onion, mushrooms, and hearts of palm and putting them over bread and cheese. Yum! I cut up a whole bunch of veggies for kabobs.

In the evening the kids enjoyed sparklers by the fireplace and Jerry’s hypothesis that the kids were going to get burned by the sparklers was not supported. We then got the marshmallows, graham crackers, and chocolate out and made some smores. I really think I made the best marshmallow. The key is to keep it away from the fire but in the heat and just be really patient. 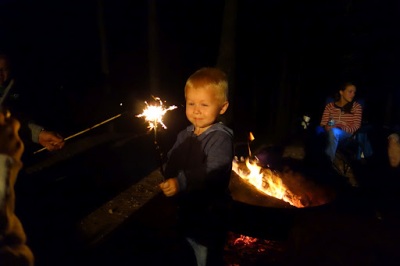 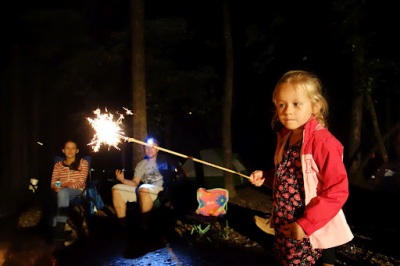 Day 3 was significantly cooler than day 2. Wrapped up in layers we rewarmed left over pancakes. We also had some apples laying around so I thought I’d make some roasted apples for our pancakes. I quartered, cored, and sprinkled sugar lightly over the apples (I wish we had some cinnamon). I then put the 4 pieces back together and double wrapped them in foil. The apples went on the grill and for the most part we tried to keep them away from the direct flames so they wouldn’t burn. Once they felt pretty soft we took them off the grill and enjoyed them over our pancakes with some syrup. It was so yummy. The combination of the crisp morning air and the roasted apples really made it feel like fall.

While we enjoyed breakfast, Jerry went on a 30 mile bicycle ride from our camp site, all the way to the top of Cesar’s Head and back (it’s an insane climb). By the time he got back and showered we were finished with breakfast and had all the tents packed up and were ready to get going. From there we drove up to the top of Cesar’s Head (once again, an insane climb) where we enjoyed the beautiful views without hiking all the miles. We enjoyed a final lunch up in Cesar’s head before we parted ways for the day. The camping trip was declared a success.

This entry was posted on September 25, 2012 by natalyaperullo in Travel.