Jerry had to go to  Belfast and London for work so we made a family trip out of it and brought my little sister along. We flew into Dublin for a couple days, then took the train to Belfast, and then flew to London. Both of us were far more excited for my little sister Lydia, 11, than we were for ourselves. Here’s a summary of our Dublin experience. 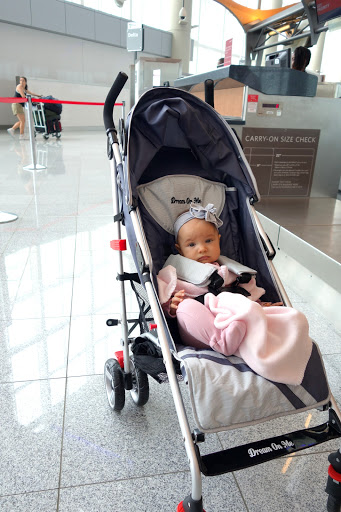 We have flown with the wee several times already, but this was her first international flight. Our flight was at 18:45. The plan was, get on the plane, feed Cella, and she’ll pass out for the night. We booked the flights a bit last minute so we weren’t able to get the bulk-head seats with the bassinet. This could have proved a problem on an 8 hr flight but we brought a co-sleeper with. After eating dinner on the plane we opened our trays, laid out the co-sleeper, and laid her down to sleep. Cella did great. She slept for about 3.5 hrs and the remainder of the time she was pretty pleasant. When she got antsy I walked around with her. Cella loves looking at faces so it was entertaining to her when people would make eye contact and smile to her. The co-sleeper was good because it allowed her to stretch out and it allowed me to go to sleep without holding her but after several hours it slowly started sliding off the trays and into our laps. This was kind of annoying, but not a deal breaker. We’ll definitely try to get the bulkhead seats with bassinet next time. I’ve heard babies are sensitive to ear popping from elevation change. Cella hasn’t shown any sensitivity to that yet. I try to feed her during take-off but if she’s not hungry I have a pacifier ready (even though she doesn’t take it, she prefers her thumb).

In preparation for the new time zone I started putting Cella to sleep a half hour earlier every night for about a week before the trip. I don’t know if this helped her or not but she switched to the time zone better than we did. We landed early in the morning and thank God there was a room ready at the hotel. They let us check in early so we checked in, showered, and took a nice 3 hr nap. Around noon we woke up starving and went out for lunch. 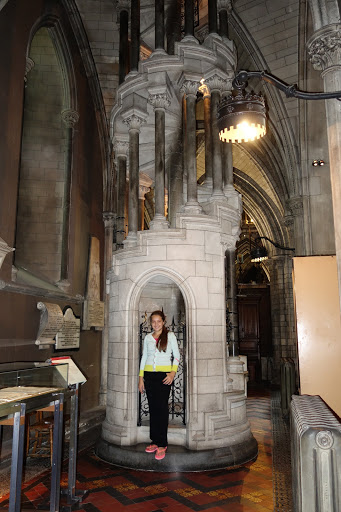 After lunch we walked to St. Stephens green. It’s a pretty little park with a pond; a nice place for a picnic. Lydia mentioned something about not knowing how to use a map. I didn’t need to hear more. I gave her the map, showed her where we were and where we wanted to be next, St. Patrick’s Cathedral, and told her to get us there. She was pretty hesitant, claiming she’d get us lost for good and trying to talk herself out of it until she realized it was of no use. And of course she got us there with no problem.

St. Patrick’s Cathedral was BEAUTIFUL! I love big ornate cathedrals. This building was founded in 1191 and was full of amazing relics from all sorts of periods. I wish we were there on a Sunday during one of their services.

From St. Patrick’s Cathedral we headed to the Viking Museum in the Viking/Medieval Area. This museum followed the Vikings as they settled in Dublin. It was one of the best museums I’ve ever been to. There was a clear path you were to follow through the building and it chronologically showed all the important historical events in Ireland and Dublin in particular. This museum was very interactive. The designers of this museum really made it appeal to all types of learners, visual , auditory, and tactile. Many of the displays were interactive and allowed you to make a souvenir to take home. 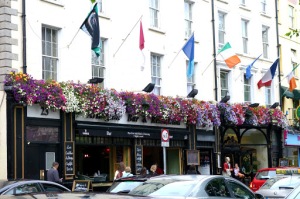 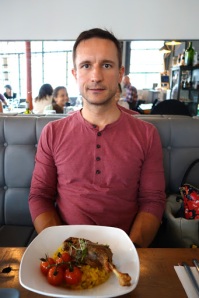 We continued making our way west until we found a quaint little restaurant for dinner. After a slew of appetizers which included liver pâté, salad, and a cheese board, Jerry had a duck leg over risotto and cherry vine tomatoes. Lydia had steak served with sweet potato and I enjoyed Cod served on basil crushed potatoes with a sundried  tomato sauce. 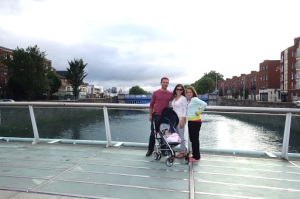 Day 2 in Dublin:
We enjoyed breakfast at a tiny bakery on Friday morning. We then grabbed some coffees to go and made our way to a dock nearby for a water tour down the Liffey River. It was nice to get on a boat and change things up from walking the whole time. The guides took us west on the river and gave us the history of the bridges we crossed and many of the important sights along the way. 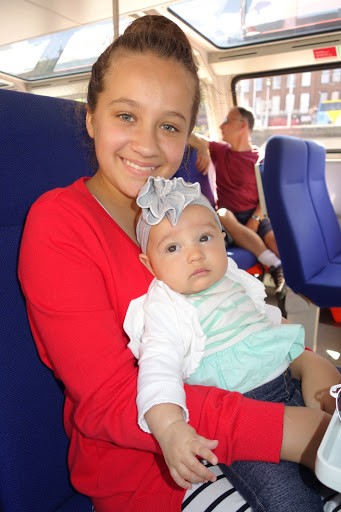 After the water tour we packed our bags and headed to the train station. We ate lunch there and Jerry enjoyed a Guinness (it really does taste so much better there) before getting on the train to Belfast. The 2.5 hr train ride was very comfortable. Cella finally passed out after fussing for an hour allowing us to get some work done (the train conveniently had wifi). Lydia spent her time journaling about the trip and eating candy. We all enjoyed the beautiful countryside views as the train made its way from Ireland to Northern Ireland (Those are two separate countries by the way, who knew!? I sure didn’t until this trip.). It wasn’t too long before I joined Cella in her unconsciousness. 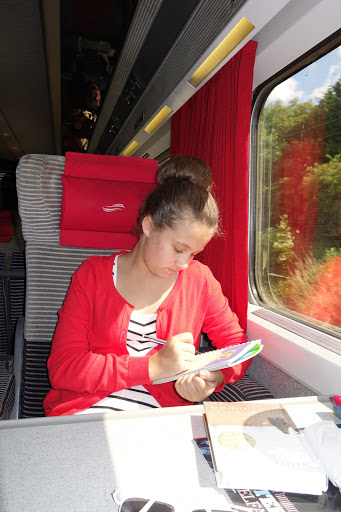 This entry was posted on August 15, 2013 by natalyaperullo in Travel.