We enjoyed this yummy dish with our neighbors a few days ago. This was my second time making it and I think I finally got it right this time. I had a lot of broth left over afterwards. It will become like jello after refrigerating if because of the bone. Just scrape off the bits of fat off the top of the jello-like broth, reheat, and enjoy. You can also freeze this broth and use it as a soup base later. This broth will add amazing flavor to anything.

Directions:
1. Brown your beef shanks in a slow cooker or a large pot over high heat. I used a touch of olive oil. Brown the shanks on both sides. Once the shanks are sufficiently browned add your water to pot, bring it to a boil and let it simmer for about 1 hour. Meanwhile, cut up your vegetables.

2. Add the garlic, onion, cilantro, parsley, chili peppers, and celery to the pot. Set the slow cooker on low and let it cook for another hour or simmer it on low in a pot for another hour.

3. After the veggies have given all they have to give take them all out of the pot (the onion, celery, garlic, peppers, and herbs). You can eat them if you want, but I discarded mine. Now comes the tricky part. Remove the meat from the pot and strain the broth. This is an optional step. I strain my broth because I like it to look clean. Pour the strained broth back into the pot and add the meat to it as well. 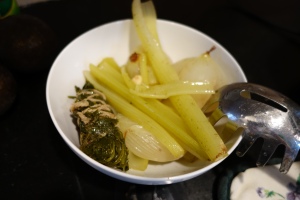 5. Finally, add the bok choy to the broth 5-10 minutes before serving. If you keep the bok choy in the hot broth for too long it will become mushy. If that’s how you like it then keep it in as long as you want. Serve the meat and broth with or without rice 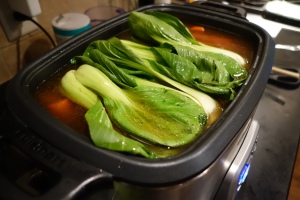 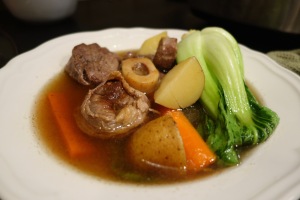 This entry was posted on October 9, 2013 by natalyaperullo in Food and tagged beef, beef chanks, bok choy, bone in beef shank, broth.