Weekend with the Family

Now that all the construction on our house was finally completed I was eager to follow through on my promise to my grandparents. I promised them they’d be the first company we’d entertain as soon as the construction was completed, and last weekend we had the privilege of entertaining my dear grandparents, my brother Paul, his wife Luda, and their 3 beautiful, energetic children. We had a fun filled weekend centered around food (of course) and the Georgia Aquarium. Here are some photos and recipes.
This is a recipe my husband made up a while back by just throwing together some odds and ends from the fridge.I first defrosted 10 Orange Roughy fillets and lightly salted and peppered them on each side. In a baking pan I laid down some spinach, onion wedges, halved garlic cloves, capers, a few kalamata olives, and a few halved cherry tomatoes. I then laid the fish down squeezing some more spinach, endive, onion, olives, capers and tomatoes in between. Since I was making 10 fillets I had two layers like that and made sure to cover the top with plenty of onion, spinach, and tomatoes. I then poured about 1/2 cup of white wine over the fish. I used Riesling because I had a bottle opened and it turned out delicious, but I would recommend a less sweet wine like a Sauvignon Blanc, and then I drizzled the top with a garlic olive oil salad dressing. I preheated the oven at 350 and baked the fish for about 90 minutes. Smaller portions don’t need as much time. 45 minutes was enough time for 2 fillets.

All the veggies and the fish make a delicious juice that we ate over some rice pilaf. The tomatoes are key to this recipe, they really add that perfect bit of tartness to the fish and the juice.

I got the salad recipe idea from a cookbook my sister Olya gave me for my birthday, it is called Raising the Salad Bar by Catherine Walthers. I followed some of the recipe with a few changes. I first cooked some white quinoa (a very healthy seed, not a grain, believe it or not, and is full of great nutrition such as plenty of protein, magnesium, and fiber) and let it cool to room temperature. I then used a bag of mixed greens and mixed it with a shredded medium sized carrot, chopped bell pepper, thinly sliced radish, cubed cucumber, and thawed pea. Once the quinoa was cooled I mixed it in with the veggies and topped the salad off with a simple dressing from the recipe book: olive oil, fresh squeezed lemon juice and salt. The salad was delicious and as Luda said, her new favorite. 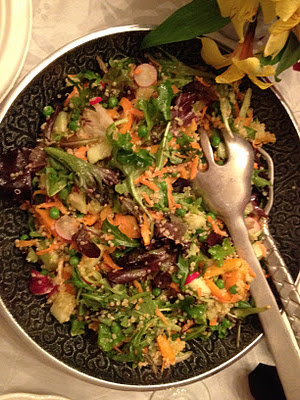 As the evening progressed the kids inevitably insisted on playing hide & seek. This reminded me of my childhood. Hide & Seek was probably the best game in the book, especially when you find yourself in a completely new house, every nook and cranny seems to be a better hiding spot than the one before. It brought back great memories to see Aaliyah and Philip running around and playing hide and seek with Paul and Jerry. If they weren’t found within about 3 minutes they’d become restless and come out of their hiding spot to investigate whether they were being searched for in the first place.
The remainder of the weekend went great as well. The aquarium is a perfect place to go with a group of people of varying ages. Not only was it entertaining for the kids and adults, but I really think my grandparents were in disbelief at seeing such big displays. Every time they saw a shark or the stingrays they would point out in bewilderment how large it was. It was such a joy to see them so truly amazed with the aquarium.

We finished the day with a late lunch/early dinner of soup, grilled steak & shrimp, rice and a salad. The soup was a chicken broth I made and served with a lemon slice and fresh herbs. Growing up at home my parents always added lemon pepper to the chicken soup, I got the idea of adding a lemon slice to the bowl instead and I like it a lot better, not only does it look nice, but it also gives the soup a fresh taste.

This entry was posted on January 20, 2012 by natalyaperullo in Food.