I think I could say today was my favorite day of this trip. Since we ate a late dinner last night we were not in a hurry to wake up this morning…sort of. We were still up by 8 and Jerry went out on a bicycle ride to try and obtain some Strava victories in Vienna while I stayed back and did some blogging. He did a decent 17.5 miles of which, unfortunately, 7 were on a flat tire. Before we could set out for our daily adventure we brought the bike to a near by mechanic and got the flat fixed. While that was being done I saw a billboard for a strawberry and tomato yogurt. This wasn’t the first advertisement I’ve seen for this limited edition yogurt and I was determined to try it before we left Vienna. We found the nearest grocery store and indeed they had the yogurt. It was delicious, what a fantastic idea. The yogurt was sweet with a hint of that acidity from the tomato. I’ve never seen this combo before and would be very excited if it showed up here in the US.

Once the bicycles were repaired we set out to find something good to eat for lunch. As we cycled up and down the cobbled streets looking for a Venetian restaurant we spotted the day before we stumbled upon a Russian & Georgian restaurant and decided to go with it instead. Even though I am Ukrainian and love to cook I don’t really cook Ukrainian/Russian food. It’s not that I don’t like it, in fact I fancy it quite a bit, it’s just not the healthiest food to eat, the pierogies in particular. The salads are great and healthy so I guess I have no reason for not making those more often and will attempt to do so after this confession. We actually enjoyed one of these great salads, винігрет, a beet root salad along with carrots, potato, onion, and peas. We also had some Икра, caviar, and пильмени and  вареники, meat and potato pierogies. To accompany our meal we chose a Georgian wine. Our food here was great but I cannot say the same about the wine. It is seldom that either of us will complain about a red wine but this one was simply not that great, a bit too sweet and just weird tasting. And of course it wouldn’t be a Russian restaurant if they didn’t insist on you having a shot of vodka along with your lunch, it was named Stolichniy after all. Jerry was a trooper, I did some major cringing but got the shot down eventually. Not only did we enjoy our lunch there but we had a chance to talk with the waiter and it is always great to meet people from the place you are visiting. 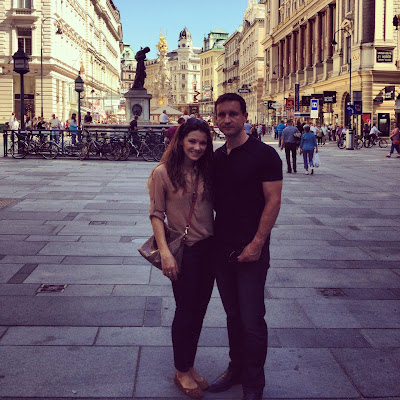 We continued from the Russian restaurant to do some shopping and eat delicious pastries. I chose a dessert that was green tea mascarpone with berries and Jerry went for the chocolate strawberries. Taking a break from our shopping and walking we sat and enjoyed cafe americanos with our sweets. 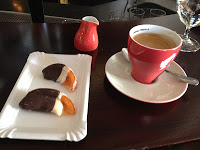 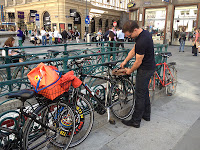 With our shopping completed we got back to the hotel to get ready for the highlight of the day, a classical concert. We attended a concert at Palais Auersperg which was historically used for musical lessons and concerts. Part 1 of the concert was a selection of 6 musical pieces by Mozart, 3 of which were performed just by the orchestra, 2 that were accompanied by amazingly talented opera singers and 1 that was performed with ballerinas. After the intermission 6 pieces by Strauss were featured with the same musicians, singers, and dancers. We really appreciated that everyone dressed the part; the men wore tuxedos while the women wore big puffy traditional dresses as they played and sang, this gave the concert that extra special touch. There were two opera singers, a man and a woman, and when they sang it felt like every inch or the room was filled with their voices, it was so beautiful. The show was so impressive that I caught myself sitting straight up, head jutted out, mouth partially opened, staring at the musicians/singers/dancers quite a few times. Upon realizing how goofy I must have looked I’d quickly relax into my chair laughing at myself only to do it again several minutes later. We walked away from the concert happy as could be chit chatting about our favorite parts as we strolled the streets in search of dinner. 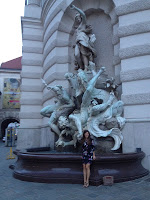 For dinner we decided on a Thai restaurant that proved to be outstanding. We had a spicy tuna tartare and scallops in a basil chili sauce for appetizers. For dinner I had the steamed sea bass with a side of jasmine rice and Jerry went with a beef panang and jasmine rice. Thai food is always delicious and this place was no exception. We have a lot of Thai restaurants here in Atlanta and we don’t visit them nearly enough. With that our last night in Vienna, the beautiful musical capital of the world, came to a delightful end.

This entry was posted on May 11, 2012 by natalyaperullo in Travel.