Our Tuesday morning began with a short but intense workout at the gym. We kind of slept in this morning and so were not eating breakfast until about 10. For breakfast we went to a local little cafe where I had a roll with prosciutto and Jerry went with the all appropriate German pancakes with jam. Our breakfast was right on time and the coffee even better. After breakfast we set out on foot to find a bicycle rental shop where we each got a bicycle. Bicycles are really key in seeing as much as possible as a tourist, walking on foot all day every day can really wear out your feet not to mention is takes so much longer to get anywhere. Since we explored many things yesterday by foot we figured by having the bicycles we’d be able to cover a substantially larger area. 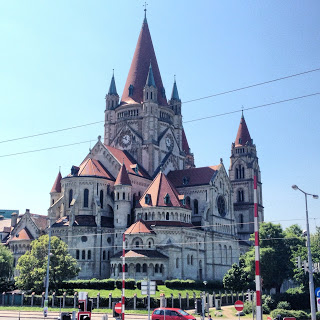 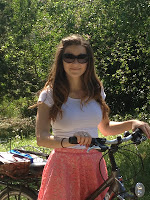 Once on the bicycles we set out to find St. Marx Cemetery, this is where Mozart is buried, he lived 1756-1791. He was buried in an unmarked grave which is now marked with a statue of a crying angel. Many areas of the cemetery were pretty overgrown but it looked very good for such an old cemetery. 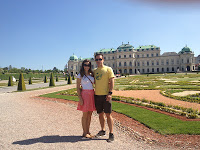 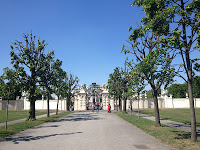 Next we accidentally stumbled upon the Belvedere, quite an awesome accident. The palace was built as a summer residence for Prince Eugene of Savoy, today it is a museum. The campus of the museum is absolutely beautiful, filled with heavily maintained gardens. There are two palaces on the campus, the upper Belvedere and the Lower Belvedere. At the upper Belvedere you will find the well known painting by Gustav Klimt, The Kiss.
After the Belvedere we set out to find a Venetian restaurant for lunch. We found a nice restaurant, Martinjaks, and for appetizers we went with the Spring rolls with smoked black pudding, black pudding being blood sausage, yes I was very appalled by the name but I was committed to eating traditional Austrian food in Vienna and the waitress promised it was a tasty dish. We also did a mixed salad. I can say this was a salad by my own heart. It had sauerkraut, the best potato salad I’ve ever tasted, pickled vegetables, greens, and marinated cucumbers. I’m really not over rating this little side salad dish, it was indeed outstanding. For our mains I went with Asparagus with braised veal cheek and truffled potato crepes. Apart from the sauce being a tad too salty for me the dish was great. The asparagus was a white asparagus and the potato crepes were very delicious. Jerry decided to go with the Reisfleisch Martinjak, veal gulash with red sweet pepper risotto and green salad. His dish was great as well, even better than mine.

We continued to cycle after lunch and as we were trying to get into the shopping areas of the city we saw a demonstration of some sorts. Jerry read the sign they had up and as much as he could read in German it said it was some sort of anti-hate demonstration, demonstrating against Nazi extremists, anti-Semitics, and anti-Muslims. This explained the unusual magnitude of policemen all around the city. We finally got into the shopping strip of the city and shopped away until dinner. 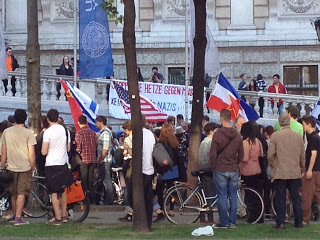 For dinner we ate at our hotel restaurant. The restaurant is on the 18th floor (by the way, ground floor is floor 0 here, so technically it was the 19th floor) with an unobstructed view of the lit up city at night. We couldn’t get a reservation there until 9, and so we had planned our day entirely around having this late dinner. We had a unique preparation of quail for an appetizer, Jerry got a grilled filet of red mullet over rice and chorizo with seafood, and I ordered a filet of gilthead (fish) with artichoke and pata negra (supposedly the best quality ham there is). By the time dinner was done it was late and we were exhausted and very happy about going to bed. And that is how day 5 on our trip came to a close.

This entry was posted on May 9, 2012 by natalyaperullo in Travel.