Today began with breakfast at the hotel. As hotels often do, they had a great spread and I chose to go with the smoked fish on fresh made bread with lettuce and Swiss cheese. It was very tasty. Eating fish for breakfast might sound weird to some but it never was growing up in my parents’ house. It wasn’t uncommon for us to eat leftover meatloaf with potatoes for breakfast. I blogged as I ate breakfast and one of the waiters asked me if I was from Russia. I seem to get that all the time when we are in Europe and not Finland, guess I look very Russian. It’s happened on multiple occasions that random people will start speaking to me in Russian. I start to reply in Russian but that quickly changes into Ukrainian and then they usually end up staring at me as if I replied to them in Spanish.

As we ate breakfast and I blogged, Jerry spent the time looking up Strava Segments he could conquer along our days cycling. Must be more rewarding than I realize to have KOMs in a foreign country. [note JP: “yes… it certainly is!]
Speaking of Jerry, he left JP notes  throughout this post.

After breakfast we headed out on foot to pick up our bicycle rentals and begin exploring the city on wheels. We began our trip by heading to the Toolonlahti Bay. This is a beautiful lake, surrounded with trees, bicycle and pedestrian paths, and sprinkled with cafes along the way. It was so peaceful and beautiful to cycle around this area. Along the way we stumbled upon Villa Anneberg. This villa caught my eye because of its impressive floral display so we went to check it out. It was built in 1832 as a summer holiday cottage out in the country before that area was considered the city. I was not only impressed with the flowers at the manor but the flowers all over the city seemed to be so well taken care of and beautiful. We would randomly stumble across hardens along our path as we cycled and they were always very well maintained and perfectly groomed. 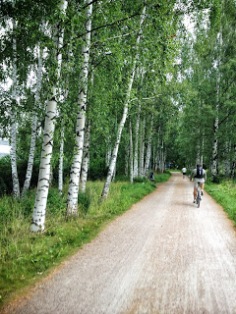 There are a lot of birch trees in Helsinki, they lined the entire path along the Bay and made for a very lovely backdrop to the path. We followed signs for Gardenia and ended up in another beautiful garden with a greenhouse and a cafe. We settled here for lunch because the food looked good and it smelled amazing. I had a mushroom soup, a baked half potato with gravy and a salad. The potato gravy was so delicious, a very Slavic type of gravy, reminded me of my mom’s meat gravy. 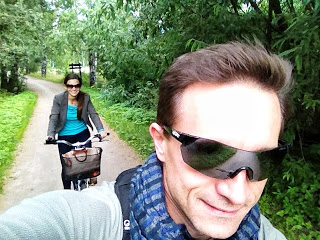 We continued on our way around the bay and headed for the National Museum of Finland. This museum documented the history of Finland and its people from the stone ages through the 20th century. I was very impressed with the amount and age of the artifacts from the stone ages. It was very interesting to read about the Finnish history from their trials with Sweden to their occupation by Russia which lasted 204 years! Who knew? Russia invaded Finland in 1713 and Finland didn’t get their independence from Russia until 1917. One of my favorite parts of the museum were the models of sample rooms from different eras of Finnish history. These were essentially small doll houses with an unbelievable  amount of detail. The museum also had an impressive display of the different types of clothing that was worn during the different eras on Finnish history. Jerry’s favorite part of the museum were the Microsoft surface tables located in the 20th century section of the museum.

Before leaving the museum I enjoyed some hot tea and Jerry some chocolate and we shared a cinnamon bun. We continued to ride around the city for a bit longer stopping into a couple shops along the way.

For dinner, as I promised, we went to the Russian restaurant. The lighting in the restaurant was very poor so I did the best I could with the pictures. The food there was everything I wanted and more. We had 3 appetizer dishes. The first was blini with caviar, onion, sour cream, and egg. Have I ever mentioned how much I love caviar? Fortunately for me, my favorite type of caviar is the most affordable type, the large orange salmon/trout roe. The second appetizer we had was…get ready for this…bear terrine with a center of duck liver. The liver was very good but the bear terrine, as weird as it sounds, was outstanding. The meat was very lean and just so tasty. [Note from JP:  Bears are awesome to eat.  Who knew?]  The third appetizer we had was bear pelmeni with sour cream and vinegar. I’ve had a lot of pelmeni in my life and these were hands down the best I’ve ever had, no joke. I’ve never had bear before, and I was a bit weirded out by the idea at first, but that all went away the minute I tasted it. Dinner at the Shashlik restaurant came with entertainment. There was a man and lady playing traditional Russian instruments and singing Russian songs, it was a very lively and fun environment. For dinner I had a barley stuffed pepper with a tomato sauce that came with garlic potatoes, braised cabbage and pickled onion. Jerry ordered a bear steak which was once again outstanding. [note from JP:  see my previous note]  We were quite stuffed after dinner and once again enjoyed the crisp walk back to the hotel.

This entry was posted on August 11, 2012 by natalyaperullo in Travel.