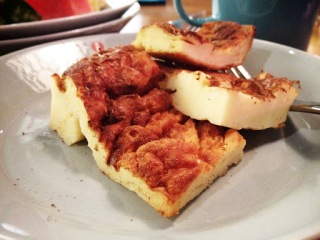 Day 3 in Helsinki began with some fitness. I went to the gym before heading down for breakfast while Jerry went on his KOM quest, in which he conquered 3. We then met for breakfast and I enjoyed Finnish pancakes. They’re different than American pancakes, I think they use a lot more egg in their pancakes and then cover them heavily in cinnamon, they were a very tasty and filling breakfast.

After breakfast we set out to shop. I’ve been meaning to buy appetizer plates to use at home so I figured it might be a good idea to buy a set somewhere along our travels. We did not find a set of plates I liked, but I did find a pair of boots, which will be very useful for the remainder of our chilly trip and Jerry found a belt he liked. From the main shopping strip we proceeded to the Helsinki Market Square. This market was full of action and excitement just like any market. They had everything from pretty flower arrangements to trinkets and toys to freshly picked berries and fresh homemade breads. 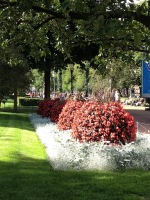 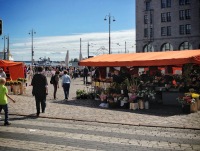 There were a ton of people at the market eating lunch. All the different stands serving lunch had pretty much the same stuff so we got in line and decided to see what all this hoopla was about. Our lunch platter consisted of potatoes, salmon, vandace fish which is a very popular food item here, and a veggie mix. As delicious as this lunch was it was certainly not a lunch I would eat on a regular basis giving up my spinach veggie salad lunches, but we enjoyed very much the opportunity to eat what the locals were eating. 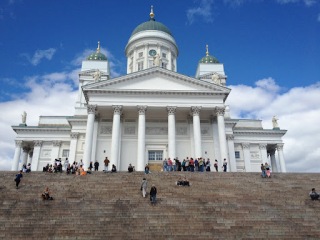 We continued on our way after the market and came to the Helsinki Cathedral built from 1830-1852. This is a Finnish Evangelical Lutheran cathedral. Next to the Cathedral was the Historical National Library of Finland. This library dates back to 1844 and we saw books there from the 13th century. Everything about this building was full of character and story. The more modern portions of the library were added in 1903. 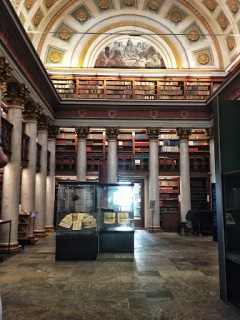 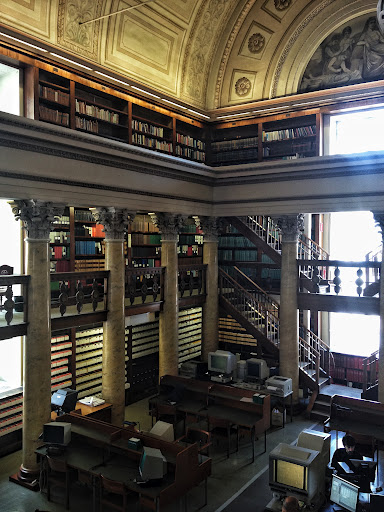 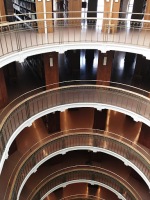 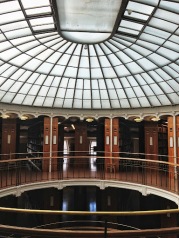 We then hopped on our bicycles and headed towards Lauttasaari Island. The island is about 3km west of the city and known for its preserved forest areas. The majority of the island was residential and a great cycling location with beautiful scenery. We found a cafe along the way, Cafe Regatta, and stopped to warm up with some tea and goodies. This cafe was outstanding, probably my favorite place in all of Helsinki. Located right on the water you had a continuous breeze. There was a tiny cozy building where you picked up your food and then sat outside to enjoy it and the view. They had a fire pit and some people were toasting sausages over the fire that smelled very good. I got a cinnamon roll with tea and Jerry went with a berry cake with whipped cream and coffee. 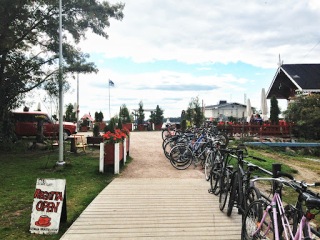 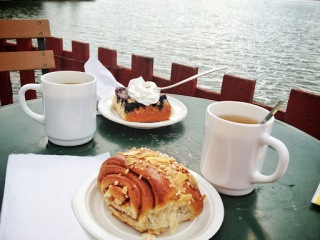 After our little break we continued on to the Sibelius Monument. This monument is dedicated to the Finnish composer Jean Sibelius, Finland’s best known composer, and is supposed to resemble his style of work. The monument, unveiled in 1967, consists of over 600 hollow steel pipes welded together in a wave-like pattern. Many of the pipes on the outer layers were made to look as if they were disintegrating. A sculpture of Jean Sibelius’ head was later added to the monument.  [note from JP:  If I were Jean Sibelius, returned from the dead to review the sculpture created in my honor I would say “hmmmm…. yeah…. um… yeah it’s uh.. well … yeah it’s very… interesting… thanks a lot.”]

We continued to cycle around until we got into the city center where we walked around another mall before going back to the hotel to get ready for dinner. We planned to have dinner at a Lappish restaurant, from the Laplands of Finland, the northern-most part of Finland. Unfortunately, they didn’t take us without reservations so we settled for a Thai place for dinner. No regrets there though. The appetizers smelled so good I forgot to get photos of them before we dug in and devoured them. Thai food is just great, always warm, spicy, and comforting in the right ways. For mains I had chicken with a chili and basil sauce over Jasmine rice and Jerry went with a red chicken curry. We had a homemade coconut ice cream with palm seed for dessert that was to die for [note from JP:  I aint dyin for no ice cream]; I would have ordered a second portion if it weren’t for Jerry’s sound reasoning.

This entry was posted on August 12, 2012 by natalyaperullo in Travel.